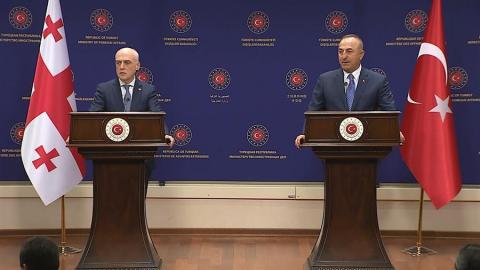 Turkey and Egypt could negotiate a maritime demarcation agreement in the eastern Mediterranean if the course of the ties paves the way for such a move, Foreign Minister Mevlüt Çavuşoğlu said on March 3 while welcoming Cairo's exploration bids that had respected Turkey's continental shelf.

"Depending on the course of our relations, we could also sign an agreement with Egypt by negotiating maritime jurisdictions," Çavuşoğlu said in a joint press conference with Georgian counterpart Davit Zalkaliani.

He welcomed Egypt's announcement of holding a tender for hydrocarbon exploration in the eastern Mediterranean by not interfering in the exclusive economic zone (EEZ) demarcated by Turkey, saying that Ankara viewed this positively.

Last month, Egypt announced the start of a bid round for oil and natural gas exploration in 24 blocks, including some in the Mediterranean.

In 2019, Turkey and Libya sealed a maritime demarcation deal for their boundaries in the eastern Mediterranean waters.

In response, Egypt and Greece signed an agreement in August 2020, designating an EEZ in the eastern Mediterranean between the two countries.

Greece claims that its islands also have their EEZs, and says they reduce Turkey's zone in the region.

The ties between Turkey and Egypt deteriorated after Egypt's president, Abdel-Fattah el-Sisi, toppled the country's former president, Mohammed Morsi, in a coup after only a year in office.

March of the mummies: Egypt readies for pharaohs' parade