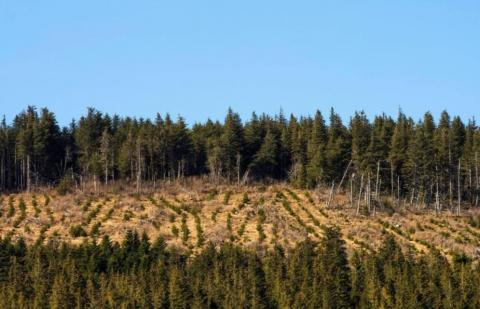 As more than 200,000 hectares of forestland turned to ash in the last 10 years in Turkey, most of the areas damaged were brought back to life as a result of the comprehensive works of the authorities.

In the last 10 years, nearly 2,500 forest fires damaged an area of 204,694 hectares across Turkey, according to the data of the General Directorate of Forestry. However, damaged areas turned green again thanks to nearly 100 million saplings planted within the scope of a project, YARDOP.

In line with the efforts of the authorities, mainly Mediterranean and Aegean provinces such as Antalya, İzmir, Muğla and Adana are among places that have been made greener by reforestation.

An area of 16,000 hectares was damaged as a result of the fire that broke out in the Mediterranean province of Antalya's Taşağıl district in 2008. It was re-afforested after rehabilitation works, turning green again 10 years later.

In a fire in the Mediterranean province of Adana's Feke district in 2003, an area of 100 hectares turned into ash. The region, which was cleared of damaged trees and reforested, was born from ashes with the green created by the seedlings planted 13 years ago.

Thousands of trees were destroyed in the fire that broke out in an area of 325 hectares in 2005 in the Aegean province of İzmir. The area, covered in black ashes, was restored after 11 years with afforestation work.

In 2020, land preparation was made for the planting of saplings on 12,113 hectares of the 19,680 hectares that caught fire, and the planting and seed sowing operations of the 5,112 hectares of land were completed.