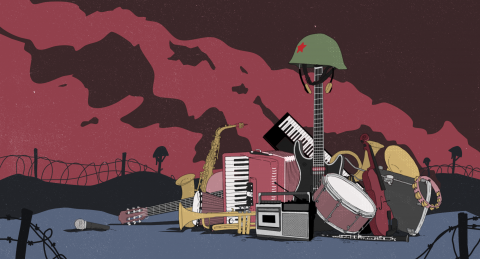 For nations once at war, such musical exchange offers hope for the future of cross-border culture in a region where, for the most part, language is no barrier.

Censorship and nationalism were the musical reality of the wars of Yugoslavia's collapse in the 1990s. The cultural exchange of today is a vast improvement, but remnants of wartime cultural suppression still linger. This is the complicated story of why.

Historically, music from the region was well received by critics in the West, with Radio Free Europe, Britain's New Musical Express and others heralding the country's vibrant output of rock and new wave music in the 1980s.

But as nationalism came to dominate politics and society, so too did it overrun music and the arts. In Serbia, street stands that once sold trinkets began offering 'Chetnik' memorabilia lionising the Serbian nationalist guerrilla movement that fought in World War Two, as well as music tapes celebrating historic battles won and lost.

Newly-established television stations with names like 'Pink' and 'Palma' began broadcasting so-called 'turbo-folk' - providing a glitzy, upbeat gloss on an otherwise harsh reality. Something approaching the genre had been present in Serbia before Yugoslavia fell apart, but it took on a different weight as war approached.

"Turbo-folk represented this quest for social stability," said Dragan Ambrozic, who as a journalist covered the Yugoslav music scene through the 80s and into the 90s.

"Most of it was just glamour, putting some shiny moments into an otherwise depressing life," Ambrozic was quoted as saying in Matthew Collin's 2001 book This is Serbia Calling about the pioneering Belgrade radio station B92 and the resistance to then Serbian strongman...