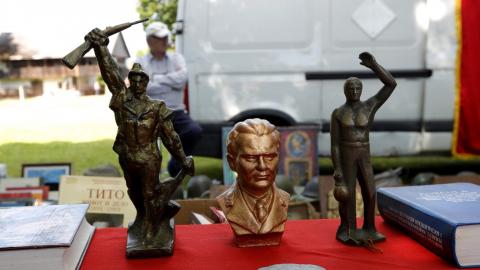 Both then and now, Tudjman and Plenkovic, the 20th century nationalist and the moderate conservative, suffered from the same ailment - selective, deliberate amnesia.

Erased: The die-hard Yugoslav behind the library

Commonly referred to in Croatia as 'the former state', Yugoslavia has been a pebble in the shoes of Croatian nationalists for the last 30 years.

Plenkovic's "a long time ago" actually translates as "in Yugoslav times", since it was the Parliament of the Socialist Republic of Croatia - part of the Yugoslav federation - that first made plans to build the library in 1966. The library was supposed to be finished by 1970, but the idea was dropped due to a lack of funds.

In 1974, Stipe Suvar, a die-hard socialist and Yugoslav, became the republic's secretary, or minister, for education and culture, and revived the plan for a new library building.

Money was scarce and all non-business investment was banned, but Suvar managed to whip up support for the project among prominent Croatian intellectuals, actors, artists. Finally, in 1988, when the Yugoslav economy was visibly falling apart, the library's foundation stone was laid and, by 1989, the building had a roof.

The collapse of Yugoslavia brought construction virtually to a halt. The newly-created Croatian state under Tudjman eventually picked up where Yugoslavia left off and finished the remaining, easier parts of the project. It took full credit, forgetting Suvar and 'the former state'.

In his eight years as secretary, Suvar, that 'red devil', was also partly responsible for the...