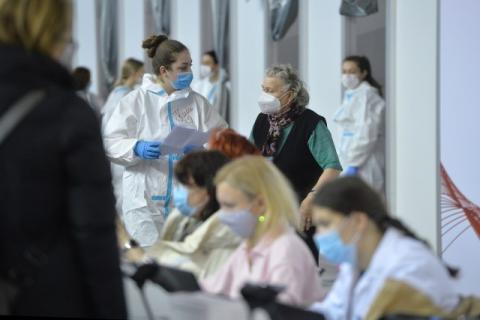 "It depends on people's behavior. We know what those measures are: physical distance, wearing a mask, hand hygiene and cough hygiene. If someone is ill, their contacts should be isolated and quarantined," Marian Ivanusa said during a guest appearance on RTS.
The last cross-section of the situation in Serbia registered 4.491 cases of infection, and Ivanua estimated that that number could quickly increase to 8.000 and endanger the health system. He stated that it is difficult to calculate what percentage of citizens should be vaccinated in order to achieve collective immunity, and pointed out that it is too early to talk about it.
"Especially having in mind the appearance of a virus that is easier to transmit. If the virus is easier to transmit, then there should be more vaccinated (to achieve collective immunity)," he pointed out.
Ivanua stated that the first vaccine will come to Serbia through the COVAX program in March, at best and added that our country had done everything in order to make that happen. He said that the problems in that program were due to some regulatory conditions and the fear of vaccines. "Only a few days ago, the first vaccines (via COVAX) were distributed in Africa, and I hope that they will be distributed in our region as soon as possible," he added.
When asked about "COVID passports", whose introduction is mentioned in the European Union, Ivanua said that the position of the WHO is that it is too early to talk about it, primarily due to the lack of vaccines.