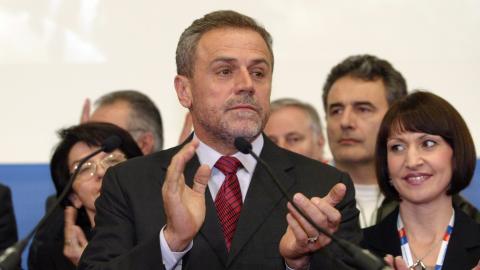 Whoever wins, experts agree he or she faces a tough task running a city dominated for so long by Bandic, whose energetic, six-term rule over Zagreb was marred by a string of corruption scandals.

"Whoever comes in his place will find a series of holes - holes in the budget, holes in organisation," Puhovski warned. Bandic, he said, covered over the holes "with his charm and his buzzing like a bee from flower to flower."

Bandic's first stint as mayor ran from 2000 and 2002, but he returned to the post in 2005 and was campaigning for a seventh term when he died of a heart attack.

Widely viewed as a populist, Bandic was the target of several investigations by anti-corruption authorities. He was detained by police in 2014 and two corruption cases reached court. He was acquitted in the first in 2018 and was still on trial for the second when he died.

Puhovski said that, without Bandic, real issues might come to the fore in the campaign for city hall, as will the left-right ideological divide between candidates.

"There is a very high possibility that [Miroslav] Skoro will emerge as a very strong candidate," Puhovski said.

Leader of the right-wing Homeland Movement, Skoro came a strong third in Croatia's first-round presidential election in December 2019 and is now a deputy in the national parliament.

After not answering the question of whether he would be a candidate for Zagreb mayor for days, Skoro finally announced his candidacy on Friday.

Puhovski said Skoro had an advantage over more established...