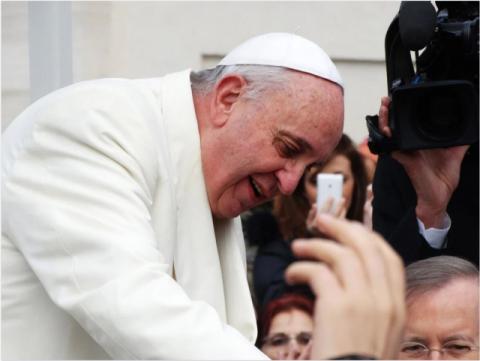 Pope Francis has called for an end to violence and extremism, on the first ever papal visit to Iraq.

In a speech after being welcomed by Iraqi President Barham Salih, Pope Francis said he was very pleased to come to Iraq, which he described as the "cradle of civilisation".

The pontiff is making his first international trip since the start of the coronavirus pandemic.

Covid and security fears have made this his riskiest visit yet, but the 84-year-old insisted he was "duty bound".

He also said Iraq's dwindling Christian community should have a more prominent role as citizens with full rights, freedoms and responsibilities.

He is hoping to foster inter-religious dialogue - meeting Iraq's most revered Shia Muslim cleric - and will celebrate Mass at a stadium in Irbil in the north.

About 10,000 Iraqi Security Forces personnel are being deployed to protect the Pope, while round-the-clock curfews are also being imposed to limit the spread of Covid.

Iraq's PM Mustafa al-Kadhimi greeted him at the airport, with a red carpet, Iraqis in national dress and songs from a largely unmasked choir.

Hundreds of people lined the airport road as the Pope's convoy, heavily chaperoned by police motorcycles, left for the city.

But the Pope was seen to have a pronounced limp, suggesting that his sciatica condition continues to bother him.

Security arrangements are massive, with the Pope mostly flying to make his visits, and possibly using an armoured car for shorter trips. In central Baghdad, billboards welcome the Pope, and Iraqi and Vatican flags fly together.

The Christians of Iraq are hoping the Pope will help them overcome discrimination.

In Baghdad, there was joy that he was visiting.

5 Places in Bulgaria Even Locals Should Visit Again