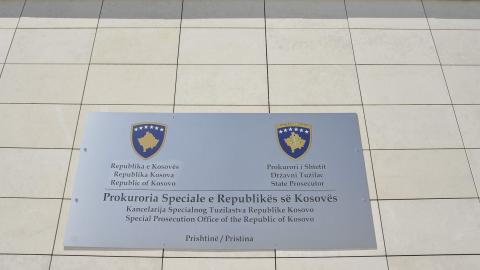 "Fewer cases are being left for the following year, but the essence is in the manner in which the cases are resolved," said Driton Demhasaj, director of the NGO 'Cohu', which has spent the past five years monitoring corruption cases in Kosovo.

Even of those that end in conviction, most result, he said, in "either suspended sentences or fines and in only very few cases - around four to five per cent - imprisonment."

Such outcomes only serve to fuel corruption, Demhasaj told BIRN. "There is a type of amnesty if I don't see punishments, especially for high-level corruption cases."

Corruption has blighted Kosovo's recovery from a 1998-99 war and hindered its economic and political development since the former Serbian province declared independence in 2008.

Successive governments have adopted multi-year action plans to root out graft, with little to show for them when the next general election comes round, roughly every two years in Kosovo's recent history.

In its own campaign, Vetevendosje promised to establishment a Bureau of Investigation to probe state officials and pledged greater powers for the country's Anti-Corruption Agency.

In its last stint in government in 2020, which lasted less than two months, Vetevendosje initiated a working group for a potential vetting process to weed out corrupt judges and prosecutors in the Kosovo judicial system. Its successor took the process on and a study for how...