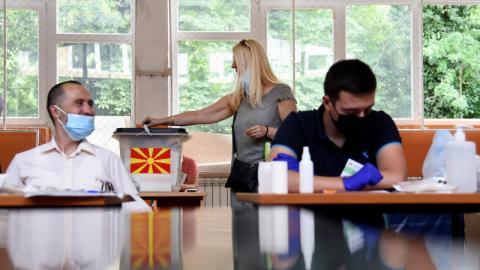 Several smaller parliamentary parties from all sides of the political spectrum in North Macedonia, supported by the main ruling Social Democrats, on Friday filed a fresh draft to change the election system and encourage more political diversity.

The small Democratic Alliance, VMRO - People's Party, the Liberal Democrats and the leftist Levica party all joined forces to submit draft changes to the country's election law that they say will give smaller parties better chances of winning seats in parliament.

The motion envisages scrapping the current six electoral districts in favour of one single unit for parliamentary elections.

Under the current six-district proportional system, introduced in 2002, each unit elects 20 legislators from party lists of 20 candidates, electing 120 deputies in all.

The system strongly favours the dominant parties who are usually the only ones able to cross the threshold to elect MPs, while supporters of smaller parties often see their votes wasted.

Many smaller parties have been demanding this change for years, arguing that a single electoral unit would make it fairer and easier for them to win seats.

"The proposed changes will help dismantle the uncontested rule of the big parties in our country and will make the parliament a real representation of the people's political affiliations," said the head of Democratic Alliance, Pavle Trajanov, whose party forms part of the ruling majority.

The head of the small Levica party, MP Dimitar Apasiev, which is a strong critic of the government, said that it supported the changes in principle.

Perhaps most notably, support for the initiative has also come from the Prime Minister and leader of the Social Democrats, Zoran Zaev.