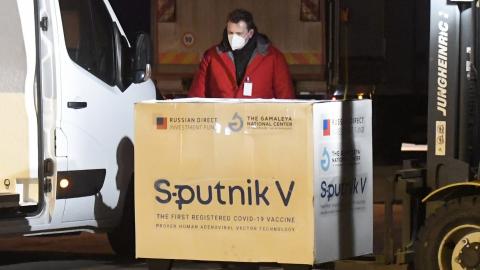 Matovic insisted in a Facebook post that the Russian jab, yet to be approved by the European Medicines Agency (EMA), is of high quality and the 2 million doses that are expected to be delivered by the end of June, the taking of which will be entirely "voluntary", can speed up the country's troubled vaccination program by 40%.

However, Deputy Prime Minister Veronika Remisova, who leads the junior coalition partner Za ludi (For The People), swiftly condemned the move as absurd, given the government position had been to only use EMA-approved vaccines. "Several members of our party are disgusted and disappointed," Remisova said, alluding to the possibility of her party leaving the ruling coalition in response.

Two MPs for Za ludi, Tomas Valasek and Miroslav Kollar, have already done so in protest at Matovic's handling of the pandemic and his vaccination strategy. Foreign Minister Ivan Korcok, nominated by SaS, another coalition partner, struck a similar note when he uncharacteristically denounced Matovic's underhand tactics in a public statement.

Deputy Prime Minister and SaS leader Richard Sulik joined Remisova in disparaging Matovic's purchase of Sputnik V as a "weird act" not worthy of a serious government, adding, though, "It was a trademark 'Matovic move'."

In spite of Matovic claiming he did not care much for the two MPs who walked out, a coalition crisis erupted amid talk of a major government reshuffle. Sulik and Remisova said their parties wanted Matovic's head and a complete cabinet overhaul. After a late Wednesday sitting, the cabinet agreed a week-long deliberation and are planning to unveil a refashioned government in the middle of next week