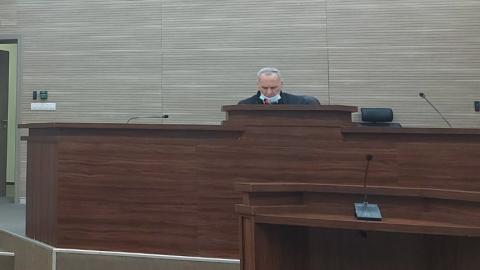 Former police officer Zlatan Krstic told his war crimes trial at Pristina Basic Court on Thursday that he was in Serbia when four Kosovo Albanians, all members of the same family, were killed in an attack on the village of Nerodime e Eperme/Donje Nerodimlje by Serbian forces in March 1999.

NATO's air strikes against Yugoslavia began on March 24, 1999 as the Western military alliance tried to force Slobodan Milosevic to end his campaign of repression in Kosovo.

The indictment claims that Krstic was directly involved in the attack on Nerodime e Eperme/Donje Nerodimlje in the Ferizaj/Urosevac municipality on March 26, 1999.

The attack was followed by torture, destruction of property, expulsions and abductions of 19 members of a local ethnic Albanian family, four of whom were killed, the charges allege.

Krstic insisted that he had good relations with the family that was targeted, as he once lived in the same village.

"Believe me or not, I felt bad when I heard about their deaths," he said.

His co-defendant Destan Shabanaj, a former police inspector, is accused of ordering the bodies of the four victims, plus a fifth person, to be desecrated while they were being buried on April 1, 1999, in violation of international humanitarian law.

Shabanaj told the court that he was not authorised to determine the place of burial.

He said that while transporting the bodies for burial on April 1, on the orders of a judge, three people "dressed in military uniforms or military police uniforms" stopped him on the road.

"They started firing. We drove quickly so they...