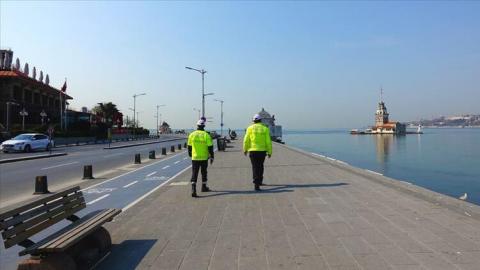 People in some of 81 provinces of Turkey will experience their first lockdown-free weekend for the first time in months after the government has recently rolled out a plan for normalization.

The provinces are classified as low, medium, high and very high-risk provinces based on several criteria, such as the rates of infections and vaccinations, and the restrictions will be eased accordingly.

Full weekend lockdowns, which were initially introduced in December 2020 after the number of virus cases spiked, are lifted in low and medium-risk provinces, but weeknight curfews remain in place in all provinces.

Weekend curfews in the high and very-high risk provinces are lifted only for Saturdays but millions of people there will have to still spend Sundays at their homes.

A map Health Minister Fahrettin Koca provided earlier this week shows that 42 provinces are categorized as low- and medium-risk provinces.

The residents of Ankara will enjoy the lockdown-free weekend as the capital is classified as a low-risk province. However, people in Istanbul, the biggest city in Turkey, and the western province of izmir, the third largest by population, are allowed to venture outside only on Saturday as those provinces fall under the high-risk category.

As the country moved to the "controlled normalization" phase, authorities simultaneously launched the dynamic supervision model, under which officials tighten inspections in the field to ensure that people and businesses are adhering to the anti-virus rules.

Under the normalization plan, restaurant and cafes can now receive customers between 7 a.m. and 7 p.m. at 50 percent capacity in low, medium and high-risk provinces while they will remain closed...