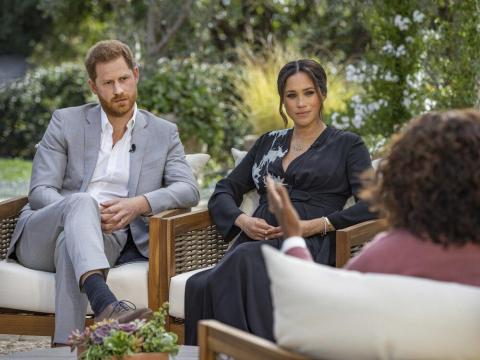 The time has finally come for audiences to hear Meghan and Harry describe the backstory and effects of their tumultuous split from royal life.

March 7 night's airing of a two-hour special hosted by Oprah Winfrey will provide the first, and unprecedented, peek into the couple's departure from royal duties and the strains it has placed on them.

How it's received is likely to depend on which side of the Atlantic Ocean viewers are on.

British audiences will wake up Monday to headlines and social media posts about Winfrey's special, but won't be able to see the full interview until Monday night when it airs on ITV.

Royal interviews that aren't tied to a specific topic are rare, and prior televised sessions have often proved problematic. Prince Andrew's 2019 BBC interview about his links with convicted sex offender Jeffrey Epstein led to his own departure from royal duties after he failed to show empathy for Epstein's victims.

Harry and Meghan's departure from royal duties began in March 2020 over what they described as the intrusions and racist attitudes of the British media toward the duchess, who is biracial.

Clips released ahead of the airings suggest that at least Meghan will have some pointed criticisms of royal life. In one she describes the royal family as "the firm," a nickname that is sometimes used affectionately and sometimes critically.

At one point, Winfrey asked Meghan how she felt about Buckingham Palace "hearing you speak your truth today?"