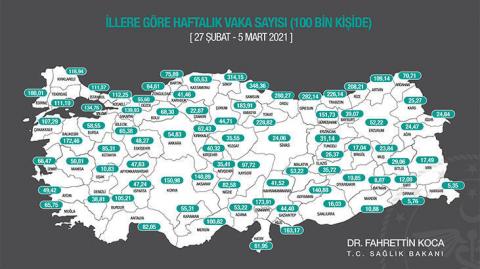 A steep rise in the number of COVID-19 cases in most of Turkey's 81 provinces and scenes of crowded streets and restaurants over the weekend have prompted experts to issue warnings as the country moved to a controlled normalization phase.

The number of coronavirus cases per 100,000 people increased in all but 16 provinces between Feb. 27 and March 5 compared with the previous week, showed a map Health Minister Fahrettin Koca posted on Twitter.

Istanbul, which was once the epicenter of the outbreak, the capital Ankara and the western province of İzmir were among those provinces which saw a rise in infections within a space of one week.

The government last week announced the plan to gradually ease some of the virus-related restrictions, including weekend lockdowns on a provincial basis while restaurants and cafes have been allowed to serve customers during limited business hours and at 50 percent capacity.

For the first time in months, lockdowns were lifted in low- and medium-risk provinces, including Ankara, over the weekend. People in Istanbul and İzmir as well as the residents of high- and very-high-risk provinces, were able to venture outside on Saturday, but the curfew was in place on Sunday in those provinces.

However, scenes of large crowds flocking to the streets, parks, restaurants and cafes, ignoring mask and social distancing rules, worried experts, prompting them to issue warnings particularly for Istanbul.

The high-risk provinces should be more cautious to reduce their risk. Normalization should be realized in a controlled manner,...