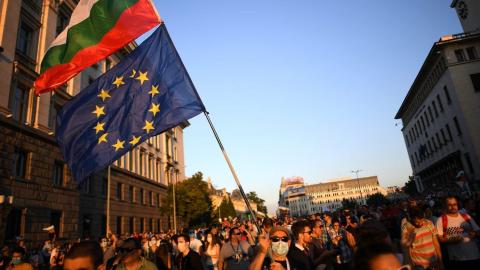 The election will pose a major test of the ruling coalition after much criticism and last year's mass protests against corruption, shrinking media freedoms and questionable populist moves, such as the decision to block North Macedonia's progress towards EU membership.

It also has the potential to elevate a number of new political players, such as the entertainer Slavi Trifonov, the former ombudswoman Maya Manolova and her "Stand UP.bg" party, the opposition "Da, Bulgaria" ("Yes, Bulgaria") party, the "Republicans for Bulgaria" party of former GERB member Tzvetan Tzvetanov and - possibly - Bulgarian Summer, the political project of an exiled oligarch, Vassil Bojkov.

Research by the polling agency Alpha released on March 2 put GERB first in the polls with the support of 28.5 per cent of the votes, followed by the main opposition Bulgarian Socialist Party, BSP, on 23.2 per cent.

Next in line is "Ima takav narod" ("There is Such a Nation"), a new party headed by the singer and entertainer Trifonov, which has won the trust of 13.3 per cent of the voters.

The mainly ethnic Turkish "Movement for Right and Freedoms", associated with many controversies connected to corruption, stands on 12.5 per cent. Democratic Bulgaria comes fifth on 5.7 per cent. Manolova's new opposition party, "Stand Up.BG", is on 4.5 per cent.

The elections come after a turbulent year, marked by the biggest anti-government protests in recent years, a controversial bid by the ruling coalition to introduce amendments to the constitution, attacks on journalists and trials of publishers.

Other ructions include high-profile ecological issues that are likely to echo over the next few years,...