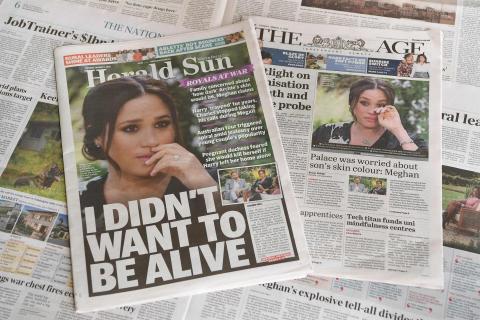 Britain's Queen Elizabeth was in crisis talks on March 9 after Prince Harry and his wife Meghan lifted the lid on life inside Buckingham Palace with an explosive interview that reverberated around the world, local media reported.

With revelations of suicidal thoughts, a racist relative and an heir-to-the-throne trapped by tradition, the sit-down with Oprah Winfrey by the Duke and Duchess of Sussex was the most startling since Harry's late mother Princess Diana's own bombshell revelations in 1995.

Harry described feeling "really let down" by his father Prince Charles, who had stopped taking his phone calls for a time.

Both Charles - the queen's heir - and Harry's elder brother William were "trapped" by the conventions of the monarchy, he said.

"They don't get to leave. And I have huge compassion for that," Harry said in the interview broadcast on CBS on March 7 night, explaining the couple's dramatic exit from royal life last year.

Meghan, a mixed-race former actress, described herself as "naively" unprepared for life in the royal family.
She said she was denied help for a mental health crisis and said there was even official concern about the skin colour of her unborn son.

"I... just didn't want to be alive anymore," she told Winfrey.

Meghan, 39, also told of "concerns" about "how dark" Archie's skin would be, saying Harry revealed to her conversations over their baby's appearance ahead of his birth on May 6, 2019.

The couple both declined to name the royal involved but Winfrey said on March 8 that Harry had told her the queen, 94, and her 99-year-old husband, Prince Philip, were not part of the conversations.

The revelations have triggered a storm of reaction on both sides of the Atlantic,...