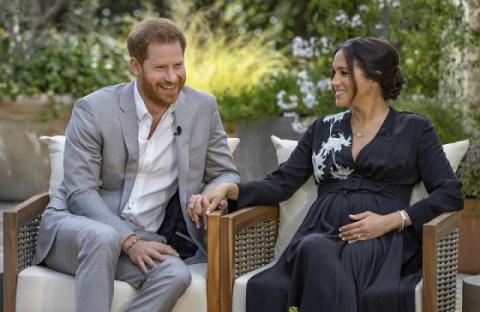 During the two-hour appearance with Oprah Winfrey, Harry also revealed the problems had ruptured relations with his father, Prince Charles, and brother, Prince William, illuminating the depth of the family divisions that led the couple to step away from royal duties and move to California last year.

The palace has not yet responded to the interview, in which Meghan described feeling so isolated and miserable inside the royal family that she had suicidal thoughts and said a member of the family had "concerns" about the color of her unborn child's skin.

The family member was not Queen Elizabeth II or Prince Philip, according to Harry, sparking a flurry of speculation about who it could be.

Leaders around the world were asked about the interview, and citizens of many countries had an opinion.

In Accra, Ghana, Devinia Cudjoe said that hearing that a member of the royal family was worried about the color of the skin of an unborn child was insulting to people of the Commonwealth, the grouping of Britain and its former colonies that is headed by the queen.

"That is pure racism," Cudjoe said. "(The) Commonwealth is supposed to foster unity, oneness amongst black people, amongst white people. But if we are hearing things like this … I think that is below the belt."

British Prime Minister Boris Johnson refused to comment on the interview, praising the queen but saying that "when it comes to matters to do with the royal family the right thing for a prime minister to say is nothing."

Finding Entertainment Online: Have Your Pick

Massive Chain Reaction Car Accident Kills 10, Including 9 Children in US