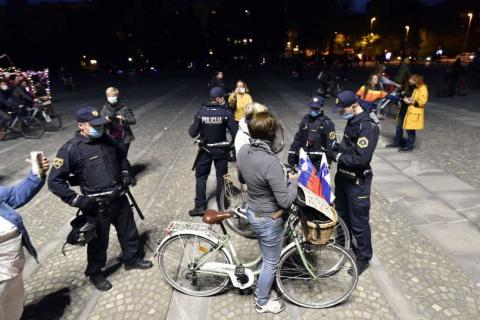 Ljubljana – The Legal Network for the Protection of Democracy, a group providing legal support to individuals and NGOs facing prosecution for non-violet public actions, described as inaccurate a claim made by Interior Minister Aleš Hojs in an interview with the STA that protests were not banned in Slovenia.

The Legal Network for the Protection of Democracy, founded earlier this year by four NGOs and individuals, noted that a government decree banning gatherings since 20 October was still in force, quoting an example when an application to hold a protest featuring ten people was turned down.

In an interview run by the STA on Tuesday the minister said it was not true the restrictions currently in force prohibited protests, but noted that a permit was needed under the public assembly act to organise any event.

If a request for a protest of up to 10 people was filed, the minister said he believed it was likely to be granted, considering that gatherings of up to ten people in public spaces are allowed, “but I don’t know who will request a permit for only 10 people”.

However, the Legal Network noted the government decree banning gatherings, which in clause 2 provides for temporary ban on “all events, rallies, weddings and religious ceremonies”, has been extended several times and is still in force. Based on it, the authorities are not issuing permits for protests.

The network quoted Deputy Police Commissioner Tomaž Pečjak as saying at the government press briefing on 18 February that up to 10 people could gather in a place but not with the intention to protest, which statement it says runs contrary to what the minister is saying now.

The Legal Network notes that a person submitted a petition with the police in mid-February to be allowed to organise an anti-government protest in Ljubljana on 25 February featuring up to ten people wearing face masks who would stand two metres apart in silence for 30 to 60 minutes.

The people’s protest assembly, which submitted an appeal in the case in cooperation with the Legal Network, said documents “show clearly that registered rallies of up to ten people, even when abiding by all safety measures, are categorically banned by police”. They expect the minister to apologize and resign.