Friendship between way-worn stork and fisherman celebrates its 10th anniversary 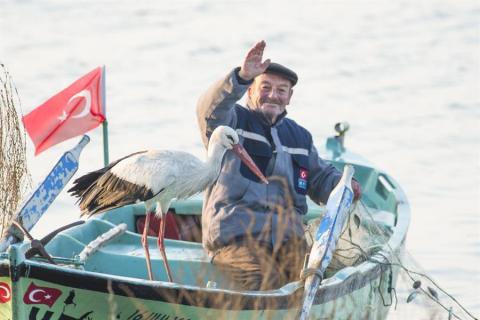 The story of a unique friendship between a fisherman and a stork is celebrating its tenth anniversary this year.

For the past 10 years, Adem Yılmaz, 68, meets up with a white stork in a village called Eskikaraağaç in Turkey's northwestern province of Bursa's Karacabey district.

Yılmaz and the stork's friendship started when the fowl perched on Yılmaz's fishing boat at Lake Uluabat and was fed by him. Since that day the white stork became a regular on the boat every morning during the half-year she spends in Turkey.

The last visit of the stork named Yaren, which settles on Yılmaz's boat every time she migrates, was welcomed by the residents of Eskikaraağaç, known locally as "the village of storks" and which in 2011 joined the European Stork Villages Network.

Having arrived three days late compared to the previous years, way-worn Yaren landed on the boat of the fisherman early on March 7 and ate her first fish. Those moments were captured by Alper Tüydeş, a well-known nature photographer.

Tüydeş, who took the first photos of Yılmaz and Yaren and revealed their story, also worked with documentary film-maker Burak Doğansoysal to film the heartwarming story. The documentary was named the best documentary at the Prague Film Awards held in Czechia.

Speaking to Demirören News Agency, Tüydeş underlined that they waited the stork in anxiety this year due to Yaren's advancing age.

"Our eyes were always in the air as storks came to neighboring villages. In this process, we waited anxiously with Adem Yılmaz," Tüydeş noted.

"I was hesitant about whether she was going to come. Thank God she came to the village yesterday and to my boat today. I am so happy," Yılmaz said, adding that he...

Delphi Forum- EBRD President: “For us Greece is a success story”