Janša calls on STA director Veselinovič to step down 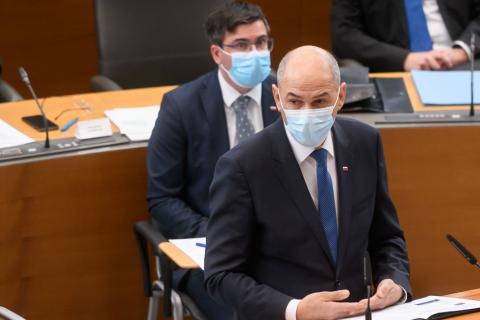 Ljubljana – Prime Minister Janez Janša called on the director of the Slovenian Press Agency (STA), Bojan Veselinovič, to step down. “It is time for the director as a political tool of the extreme left to step down and take responsibility for his unlawful actions. And allow the STA to work and develop normally,” Janša wrote on Twitter on Tuesday.

The STA turned to the prime minister’s office for explanation about which unlawful actions Janša was referring to. In response, the office said it would not comment additionally on the issue.

The prime minister also said in the tweet that since the STA had been led by Veselinovič, “journalists with fatal disease are being dismissed and lie is often being sold as the truth”.

Janša made the statements while sharing a tweet by the head of the Government Communication Office (UKOM), Uroš Urbanija, who tweeted that Veselinovič was lying when he told the TV show Tednik on Monday that the STA did not wish to respond to UKOM’s inquiries about the length of news articles.

The government said on Twitter this was “fake news”.

He also inquired about how the STA guaranteed that statements written by someone at the agency were being objectively reported on, whether the opinion of every employee of the agency had been obtained before one such statement, and why the STA had not published an article about this.

The letter by Urbanija came a few days after the prime minister labelled the STA a national disgrace on Twitter after learning that an interview with rapper Zlatko published by the STA was longer than the agency’s article about an event featuring Janša and his Hungarian counterpart Viktor Orban.

“Without arguments and proof the prime minister can obviously afford anything. Even abjectly abusing the deceased by means of untruthful statements that have been denied publicly on several occasions,” Veselinovič said in response.

He said the comments made by Janša were unworthy of the prime minister of a country that will preside the Council of EU and celebrate its 30th anniversary this year.

The STA management has said several times that all the documents are available to the government as the legal representative of the sole shareholder of the agency. The government has not requested the documents but the UKOM has, providing no government authorisation for acting on its behalf.

The Trade Union of Slovenian Journalists denounced Janša’s call for Veselinovič’s resignation as unauthorised and unlawful interference in the editorial autonomy of a public information service.

The trade union added that the prime minister was also persisting in violating the legislator’s clearly expressed and enacted will to provide uninterrupted financing to the STA to allow it to inform citizens in an unbiased and independent way.

The union expressed its support for the STA staff and management, urging the state again to honour its financing obligations, and the prime minister to stop stepping up uncertainty for “distinctly short-term political purposes”.

The STA’s operations are at risk after the financing of the public service has again been suspended in 2021 despite the provisions of the seventh coronavirus relief act, which says the STA must be funded in line with its business plan regardless of the signing of a special contract on the public services.

The STA requested for the contract to be signed at the end of 2020 but has not received a reply.

The STA receives about EUR 2 million for its public services from the state a year, which is almost half of the agency’s annual revenue.

The post Janša calls on STA director Veselinovič to step down appeared first on Slovenia Times.