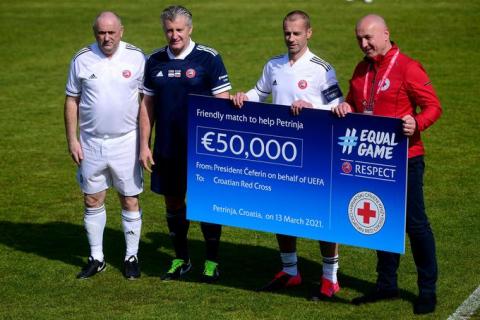 Ljubljana – Slovenian and Croatian football legends played a charity match on Saturday in the Croatian town of Petrinja to raise funds for the area that was hit by a devastating earthquake at the end of last year. The Croatian Red Cross was handed out a donation of EUR 50,000, the Slovenian Football Association (NZS) said.

The match was played on initiative of Slovenia’s Aleksander Čeferin, the president of the Union of European Football Associations (UEFA), who handed out the donation to the Croatian charity organisation on behalf of the UEFA.

Davor Šuker, the head of the Croatian Football Federation, handed out a donation of 200,000 Croatian kunas to the regional football association intended for reconstruction of football facilities that have been damaged by the earthquake.

A EUR 5,000 donation was also handed out to the Mladost football club from Petrinja by NZS president Radenko Mijatović.

Čeferin said that when he had heard about the tragic earthquake in Petrinja, he had immediately contacted Šuker to talk about ways to help the area.

“Football is solidarity, football is friendship and we agreed to organise this match and for the UEFA to jump in to help with funds. I am proud that this charity went was a success,” he added.

Šuker thanked the UEFA for the donation and said that the “ball will always be rolling and the most important thing now is that people in this part of the country get a roof over their heads again.”

“It was a wonderful event with a touch of charity. We always want to help when this is possible,” added Mijatović.

It was on 29 December 2020 that the quake of magnitude 6.4 hit Petrinja, south-east of the capital of Zagreb, killing seven people and causing substantial material damage. It was followed by several powerful aftershocks.