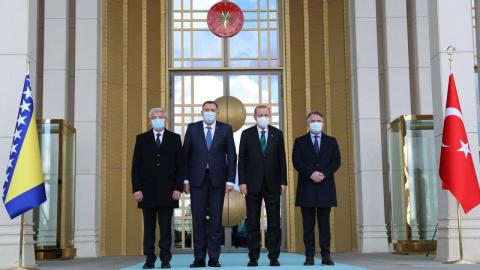 Bosnia and Herzegovina and Turkey signed the agreement to build the Bosnian stretch of a highway to link Sarajevo and Belgrade on Tuesday in Ankara in the presence of Turkish President Recep Tayyip Erdogan and the three members of the tripartite Bosnian presidency.

The highway will be "the largest integrated infrastructure project in Bosnia, which will connect the two countries", Milorad Dodik, the Serb member of the Bosnian presidency, told a press conference after meeting Erdogan.

"I am convinced that President Erdogan's support for this project is crucial for its realisation," Dodik added.

Erdogan noted that the foundation stone for the highway has already been laid in Serbia.

Dodik suggested that a branch of the Turkish Stream gas pipeline to Bosnia could be built along the route of the highway.

Erdogan added that this is not a problem for Turkey.

It has not yet been made clear how the Bosnian stretch of the highway will be funded, although Turkey has suggested that it will provide the money.

The agreement between Turkey and Bosnia offers the possibility of financing through Turkish banks or international credit institutions.

The key question is whether Turkey will provide a soft loan, with terms favourable to the borrower, or seek a concession for Turkish companies to build and manage the highway, sections of which may not be financially feasible based only on the collection of road tolls.

"Finances are still being discussed, it is necessary...