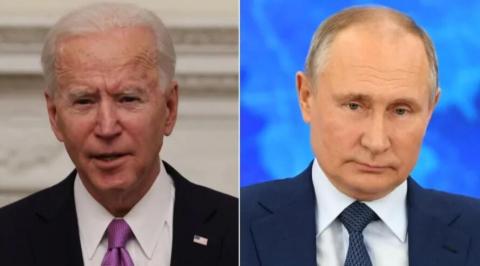 President Joe Biden said on March 17 that Russian President Vladimir Putin will face consequences for directing efforts to swing the 2020 U.S. presidential election to Donald Trump, and that they would come soon.

"He will pay a price," Biden told ABC News in an interview that aired on Wednesday. Asked what the consequences would be, he said, "You'll see shortly."

Biden recounted that in their first call, held last month, he opened by saying to Putin that "we understand each other."

And when asked in the interview if he thinks Putin is a killer, he said, "I do."

Putin authorized influence operations to help Trump in last November's presidential election, according to a declassified intelligence assessment that found broad efforts by the Kremlin and Iran to shape the outcome of the race but ultimately no evidence that any foreign actor changed votes or otherwise disrupted the voting process.

The report released on March 16 from the Office of the Director of National Intelligence represents the most detailed assessment of the array of foreign threats to the 2020 election. These included efforts by Iran to undermine confidence in the vote and harm Trump's re-election prospects as well as Moscow operations that relied on Trump's allies to smear Joe Biden, the eventual winner.

Despite those threats, though, intelligence officials found "no indications that any foreign actor attempted to interfere in the 2020 US elections by altering any technical aspect of the voting process, including voter registration, ballot casting, vote tabulation, or reporting results."

The report is the latest official affirmation of the integrity of the election, even as Trump supporters continue to make false claims of interference, from foreign...

Zarrab lives lavish life in US