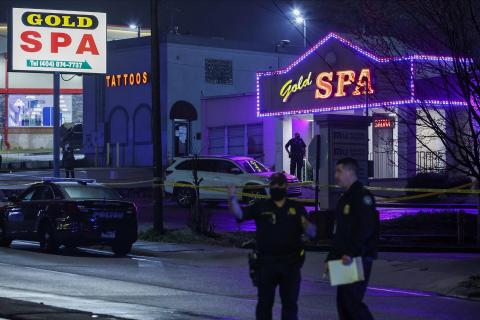 Eight people - the majority believed to be women of Asian descent - were killed in shootings at three different spas in the U.S. state of Georgia on March 16 and a 21-year-old white man was in custody on suspicion of staging all three attacks, police said.

The shootings came with many Asian-Americans already on edge following a recent spike in hate crimes against the community - and triggered immediate fears that Asian-run businesses may have been deliberately targeted.

Four of the victims were killed at Young's Asian Massage near Acworth, a suburb of Georgia's capital city Atlanta, the Atlanta Journal-Constitution reported, citing the Cherokee County sheriff's office.

Captain Jay Baker of the sheriff's office told the newspaper that the victims were two Asian women, a white woman, and a white man, while a Hispanic man was wounded.

Police told CNN told that all four victims in Atlanta also appeared to be Asian.

Authorities have identified Robert Aaron Long as a suspect in all three shootings.

Based on the pattern of surveillance video from the shooting scenes, Atlanta police spokesman Sgt. John Chafee told AFP: "It is extremely likely our suspect is the same as Cherokee County's, who is in custody."

Long was taken into custody about 150 miles (240 kilometers) from Atlanta after being caught on surveillance footage, according to the Atlanta Journal-Constitution.

"At this time, investigators are gathering information from both scenes to determine exactly what occurred and attempting to obtain confirmed...