Mongolian plover latest species to be spotted in Hatay province 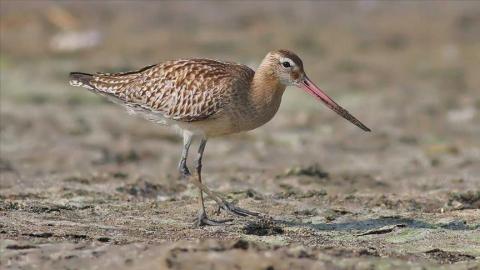 Positioned on the migratory route of numerous birds due to its climate and water resources, southernmost province of Hatay boasts 375 bird species.

The latest species to be spotted in the province is the Mongolian plover (Charadrius mongolus). These birds, distinguished by their long legs and black beaks, had been seen before in other parts of Turkey.

Ali Atahan, president of the Subaşı Bird and Butterfly Watching Association, said they came across the Mongolian plover during regular observations in the Milleyha wetland area of Samandağ district.

Underlining that the species was spotted in Hatay for the first time, Atahan said, "The bird's homeland is China and the east coast of Russia, and it incubates in these regions. But it spends the winter in the regions from India to the northern coast of Australia."

He went on to say that the bird was seen in Turkey for the third time. The first time it was spotted was in Bitlis province in 2004, and the second in 2012 in Adana province, he added.

Negative rapid test sufficient to enter Slovenia as of Monday
Football: Cristian Manea - We are going to make a very big surprise at the Olympic Games