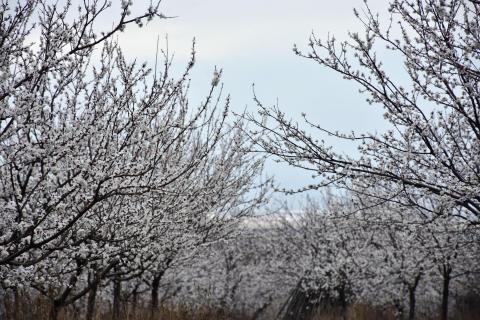 The eastern province of Malatya is set this weekend to treat tourists with the visual feast of blossoming fruit during its three-day Apricot Flower Festival.

The beauty of flowering Malatya apricot orchards, which have earned a coveted EU geographical indication, will be spotlighted by the festival, which started on March 19.

In 2017, apricots from Malatya, known as the apricot capital of the world, became the second Turkish product to get an EU designation after Aegean figs. In spring, the orchards by Karakaya Dam Lake, where apricot trees first bloom in the province, are like a dazzling sea of white.

The apricot gardens serve up a visual feast in the province, as there are nearly 9 million apricot trees offering a favorite destination for photo enthusiasts and social media sharing.

The festival, inspired by Japan's Cherry Blossom Festival, also touts many historical sites in the province, such as the Arslantepe Mound, which is on the UNESCO World Cultural Heritage Temporary List.

Mehmet Zeki Saygı, the head of the Malatya Tourism, Gastronomy, and Promotion Association, said that they invited the country's leading 30 travel agencies to the province.

Saying that they will organize various events during the festival, Saygı added that Malatya is also famed for its distinctive cuisine.