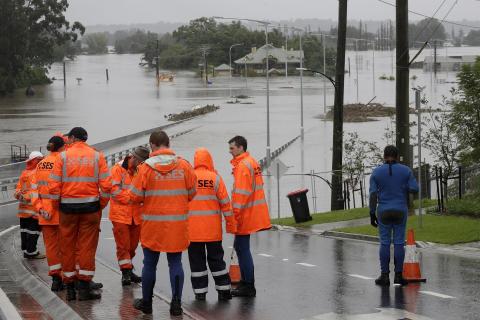 The days-long deluge has inundated coastal areas of New South Wales, the country's most populous state, including parts of Sydney.

On March 22, eight million residents were told to avoid unnecessary travel and to work from home if possible, as some hard-hit areas received 25 centimeters (10 inches) of rain in 24 hours.

Just over a year ago, the region was parched: suffering prolonged drought, water restrictions and unprecedented bushfires.

"I don't know any time in a state history where we have had these extreme weather conditions in such quick succession in the middle of a pandemic," said New South Wales Premier Gladys Berejiklian.

Scientists have warned Australia can expect more frequent and more extreme weather events as a result of climate change.

About 18,000 people have been ordered to evacuate and 38 regions have been declared disaster zones, Berejiklian added.

Prime Minister Scott Morrison, whose conservative government has been accused of dragging its feet on climate action, said Australia was "being tested once again" by a "terrible event".

He told parliament that Australia's defense force was expected to be called in to assist with the clean-up and recovery.

Emergency services have received at least 8,800 calls for help and rescued hundreds of people from floodwaters since the crisis began.

The state's Mid North Coast has been particularly badly affected, with Berejiklian declaring the region had been struck by a "one in 100 year" disaster.