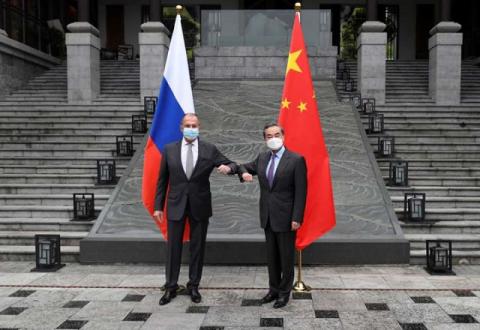 The foreign ministers of China and Russia displayed unity at their meeting Tuesday amid criticism and Western sanctions against them over human rights.

Wang Yi and Sergei Lavrov rejected outside sniping at their authoritarian political systems and said they were working to further global progress on issues from climate change to the coronavirus pandemic.

At their initial meeting in the southern Chinese city of Nanning on Monday, Wang and Lavrov accused the U.S. of interference in other countries' affairs and urged it to rejoin the Iran nuclear agreement, something that President Joe Biden's new administration has approached cautiously. Russia and China both maintain close relations with Tehran.

The two officials continued that rhetoric at a news conference on Tuesday, where Wang sharply criticized coordinated sanctions brought by the European Union, Britain, Canada and the United States against Chinese officials over human rights abuses in China's far western Xinjiang region.

"Countries should stand together to oppose all forms of unilateral sanctions," Wang said. "These measures will not be embraced by the international community."

China says members of the Uyghur and other Muslim minority groups in Xinjiang have voluntarily taken part in job training and de-radicalization courses, denying charges that more than 1 million have been locked up in prison-like reeducation camps where they are forced to reject their native culture and pledge loyalty to the ruling Communist Party and its leader Xi Jinping. Media outlets, foreign governments and activist groups say abuses, including forced labor and coerced birth control, are ongoing.

China responded immediately Monday to the EU's move by imposing sanctions on 10 European...