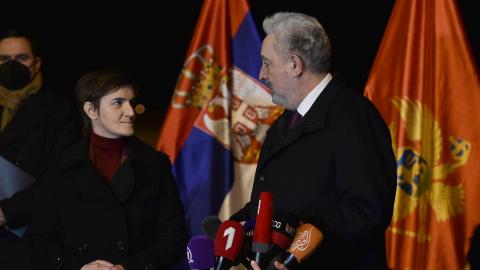 The minister will be visiting Serbia almost a month after Serbian Prime Minister Ana Brnabic donated a consignment of Russian Sputnik V COVID vaccines to Podgorica on February 17.

Those have been the only official contacts between the two governments since three opposition blocs won a slender majority in Montenegro's parliamentary elections last August, ousting President Milo Djukanovic's long-ruling Democratic Party of Socialists, DPS.

Dragan Djukanovic, head of the Belgrade-based NGO Center for Foreign Policy, said that relations between the two countries are not what they should be, despite the regime change in Montenegro.

"Serbia-Montenegro relations are not as good as was expected when there was a change of government at the end of August in Montenegro. They are not following the dynamics that could have been expected," Djukanovic told BIRN.

Despite vows to improve bilateral relations, both governments have had disagreements in recent months. On January 25, Montenegrin Prime Minister Zdravko Krivokapic refused to revoke the former government's expulsion of the Serbian ambassador, Vladimir Bozovic, saying it could violate Article 9 of the Vienna Convention on Diplomatic Relations.

Serbia's President, Aleksandar Vucic, suggested that Bozovic should stay in post in case Brnabic visited Montenegro. On March 19, Vucic said he hoped both PM Krivokapic and President Djukanovic would visit...