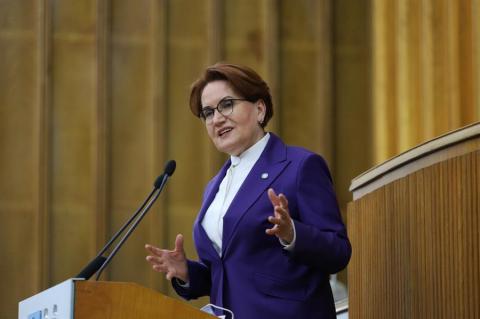 "They do not have any concerns about protecting women or our children. Their only priority is to protect their seats. The Istanbul Convention keeps alive," she said, addressing her party members at the parliament.

She stressed that the state has to protect women, children and family, and the Istanbul Convention aims to reach this goal, while criticizing the government for pulling out the accord to "seek votes" of circles.

"They can terminate an international agreement on their behalf just because they wanted it," she said, identifying the move as "extortion of rights."

"In our constitution, it is said that the presidential decree cannot be issued on the issues stipulated to be regulated by law. In other words, it says that the decisions and procedures of the president are not above the constitution and laws," Akşener said.

Turkey withdrew from the European treaty on preventing and combating violence against women and domestic violence, according to the country's Official Gazette early on March 20.

President Recep Tayyip Erdoğan issued a decree to withdraw from the Istanbul Convention that was signed in 2011.