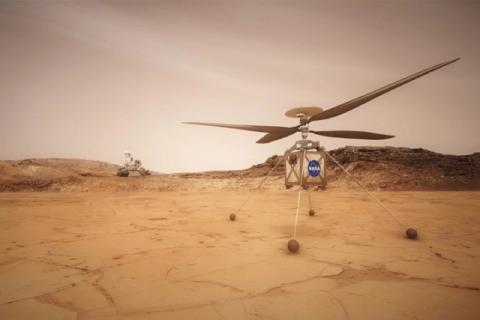 As exciting as the entire Perseverance mission to Mars is, one of the events most looked forward to by us Earthlings must be the first flight of Ingenuity. After conducting numerous checks and double-checks, the Perseverance team has set April 8 as the date on which they hope to attempt the first controlled powered flight on another planet.

If all goes well, then in about two weeks Ingenuity will make its first hovering flight about 10 feet above the Martian soil. But the meantime will be chock full of preparation.

In the first place the team had to identify an "airfield," a ten-meter-square space of flat ground close at hand to Perseverance's landing zone. Having done so, the rover will soon make its way to the exact center and confirm its location.

Then the helicopter itself must be detached from the belly of the rover, to which it is apparently locked, bolted, and cabled. These are meant to keep it secure during the chaotic landing process, and are irreversible — so the team has to be 100 percent sure this is the spot and the conditions are right. The process should take about five days.

Once Ingenuity has been detached from Perseverance and rotated to flight-ready position, it will hang just five inches above the surface and use its few remaining connections with the rover to charge its batteries. Perseverance will then set it down and quickly drive away.

"Every step we have taken since this journey began six years ago has been uncharted territory in the history of aircraft," said Bob Balaram, chief engineer of the project at JPL, in a NASA news release. "And while getting deployed to the surface will be a big challenge, surviving that first night on Mars alone, without the rover protecting it and keeping it...