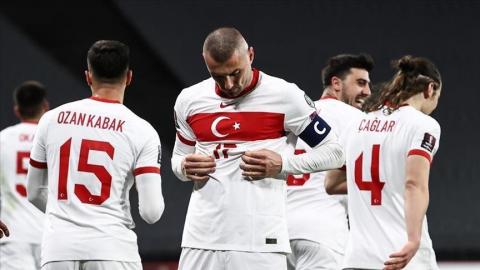 Yılmaz, the 35-year-old Lille forward, struck twice before the break and again late in the second half to secure the win in the Group G opener just as the Netherlands was threatening a comeback.

"We are going through an extraordinary period," Turkey coach Şenol Güneş said after the game, referring to the pandemic conditions.

He said that having good faith and confidence, the team wished to make a good start, being aware of the difficulty.
"The Turkish team always aims to win the game," Güneş added.

Turkey has not qualified for a World Cup since finishing third in 2002, while the Dutch failed to reach the last tournament in Russia after also finishing third in Brazil in 2014. The Netherlands, which has finished runner-up three times at the World Cup, also missed the 2016 European Championship and its recent struggles in qualifiers resurfaced at Atatürk Olympic Stadium.

Yılmaz opened the scoring in the 15th minute with a shot from outside the penalty area that deflected off defender Matthijs de Ligt's hand to beat goalkeeper Tim Krul. He doubled the lead from the penalty spot in the 34th minute after Donyell Malen fouled Okay Yokuşlu.

AC Milan midfielder Hakan Çalhanoğlu made it 3-0 in the first minute of the second half, turning in space outside the penalty area and firing a low shot into the far corner.

One of the replacements, Davy...