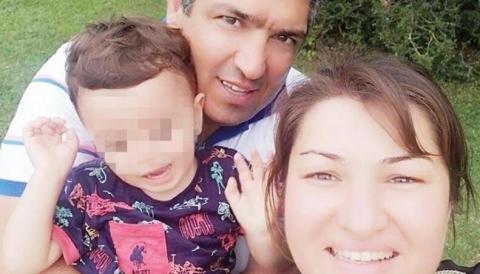 A foster family in the southern province of Adana has been fighting a legal battle for 1.5 years against their adopted son's biological father, who is asking for his son to be returned to him.

According to the lawsuit, a couple, Ayça Çatal and Atakan Çatal, got married in 2003 and did not have a baby for 12 years.

In 2015, the couple applied for the Society for the Protection of Children to adopt a baby, and in 2018, the institution gave Umut, who was only 45 days old, to the couple.

But when Umut was 9 months old, his biological father showed up from the southeastern province of Diyarbakır.

According to the biological father, the biological mother divorced him three months before Umut's birth and gave the baby to the Society for Protection of Children without his knowledge.

"We were going to make a custody agreement for Umut, but the biological father's application locked the legal process," said Ayça Çatal, the foster mother.

"The biological father has two children and is living in a boxy house and surviving on the dole," she added.

According to the foster mother, the officials arranged a meeting with Umut and his biological father.

"Umut met him for only five hours. Whatever happened there, I don't know. But when we got Umut back, he begged us not to meet his biological father again," Ayça Çatal said.

Due to the legal process, the officials will take Umut from the couple in the middle of April and give him to his biological father.

Noting that Umit, who is now 2.5 years old, is in depression, Ayça Çatal asked, "Why doesn't anybody care about Umut's future?"