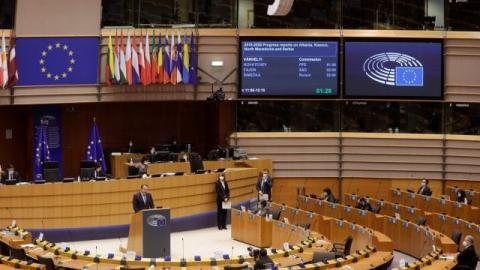 Serbia has taken issue with the latest European Parliament report on the country adopted on Thursday, which repeated earlier criticisms of unsolved high-profile crime and corruption cases and attacks on independent media.

Ivica Dacic, president of the parliament and the leader of the Socialist partners of President Aleksandar Vucic's Progressives, asked the Committee for European Integration, a Serbian parliamentary body, to consider the report and "submit a proposal on that" to the deputies.

Prime Minister Ana Brnabic, answering MPs' questions on Thursday, largely ignored the report's criticisms but passed the buck for Serbia's progress back to the EU.

"We are ready, we continue to work, and how it will continue to flow really depends to the greatest extent on the EU member states," she said.

Despite the EP report's critical remarks on media freedom in Serbia, and the adopted amendment condeming smear campaigns against media and civil society organisations, Brnabic insisted that Serbia had "worked a lot on freedom of the media".

The report named four high-profile corruption affairs in particular: the "Jovanjica" case, concerning a massive illicit cannabis farm; the "Krusik" case of a minister's family's alleged involvement in arms trading; the "Savamala" case, concerning the controversial demolition of buildings in Belgrade to make way for the a redevelopment project; and potentially corrupted affairs concerning the state-owned Telekom company.

In the Thursday afternoon vote, 407 MEPs were for and 198 were against these matters being specifically...