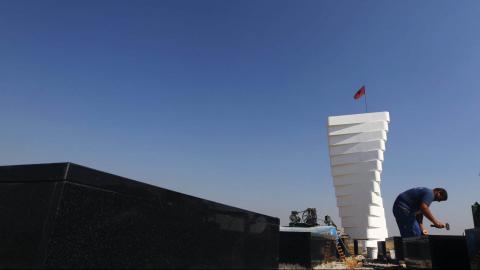 A joint statement issued by Kosovo's president and prime minister condemned any "involvement of citizens of Kosovo in the Macedonia incidents". The surviving gunmen were convicted of terrorism.

Beg Rizaj was a member of the Kosovo Liberation Army during the 1998-99 war in Kosovo and then fought in another armed conflict between ethnic Albanian rebels and the security forces in North Macedonia in 2001. His statue in Decan/Decani was not commissioned by the Kosovo authorities, but was an independent initiative of his former KLA guerrilla comrades.

Bashkim Ramosaj, the mayor of the Decan/Decani municipality, confirmed that the statue was erected in 2018 by a group of Rizaj's friends, mostly war veterans, and that the local assembly had no problem with his memorial being installed in the square.

"Beg Rizaj was a surviving war hero and given this, we did not discuss the way in which he was killed [in Kumanovo]," said Ramosaj.

"After all, there is no law in force that obliges us to follow any other procedure. We assessed that [his statue] deserved to be in the centre of the city," he added.

'Devaluation of the symbols of the war'

The monument to Rizaj is an example of the widespread phenomenon in Kosovo of people erecting memorials and statues, mostly dedicated to wartime figures, without having to go through any legal procedure to gain permission or any public debate about whether the monument is valid or not.

"Sometimes this doesn't have anything to do with our history, but is something initiated by a family or a group of friends," Bislim Zogaj, head of Kosovo's Agency for Managing Memorials, told BIRN.<...