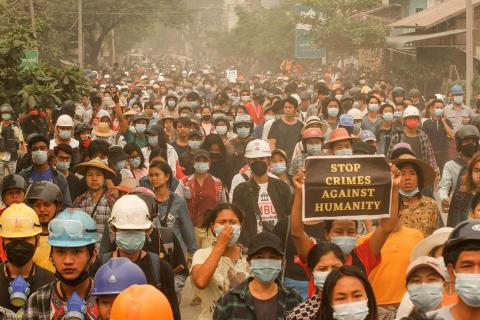 Defense chiefs from a dozen countries on March 28 jointly condemned the bloodbath in Myanmar a day earlier, when at least 90 people -including several children -were killed after security forces opened fire on anti-coup protesters.

Myanmar has been in turmoil since the generals ousted and detained civilian leader Aung San Suu Kyi, triggering mass protests demanding a return to democracy.

The junta on March 27 staged a major show of might for its annual Armed Forces Day as the death toll since the February 1 coup climbed to at least 423, according to a local monitoring group.

The defense ministers of 12 countries including the United States, Britain, Japan and Australia condemned the Myanmar military's use of lethal force against civilians.

"A professional military follows international standards for conduct and is responsible for protecting -not harming -the people it serves," the rare joint statement said.

"We urge the Myanmar Armed Forces to cease violence and work to restore respect and credibility with the people of Myanmar that it has lost through its actions."

Funerals were held Sunday for some of the victims, after the bloodiest day since the putsch.

In Mandalay, the family of Aye Ko, a father-of-four, commemorated his life at a service after he was killed overnight.

"We are told by the neighbors that Aye Ko was shot and thrown into the fire," a relative told AFP.

"He was the only one who fed the family, losing him is a great loss for the family."

Despite the dangers, protesters hit the streets again in the cities of Bago and Monywa, and in the small town of Moe Kaung in Kachin State, according to local media.

A day earlier, violence erupted across the country with the military...