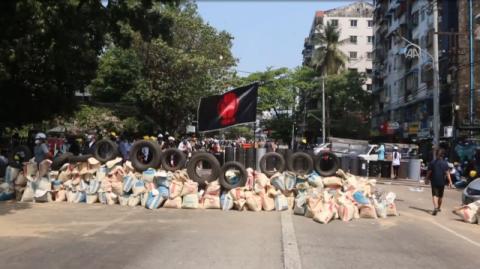 The US has said that it is "horrified" by the killing of scores of anti-coup protesters in Myanmar on Saturday.

Secretary of State Antony Blinken accused the military of "a reign of terror" that was "sacrificing the lives of the people to serve the few".

Saturday was the deadliest day since last month's military takeover.

The latest violence took the number killed in the suppression of protests in Myanmar since the 1 February coup to more than 400.

The defence chiefs of a dozen nations, including the UK, on Sunday issued a rare joint statement condemning the military's violent actions.

The US, Japan and Australia were also among the signatories of a statement that said: "A professional military follows international standards for conduct and is responsible for protecting - not harming - the people it serves."

UN Secretary-General Antonio Guterres said he was "deeply shocked" at the violence and British Foreign Secretary Dominic Raab called it a "new low".

The lethal crackdown against civilians - including children - came as protesters defied warnings and took to the streets in towns and cities.

"They are killing us like birds or chickens, even in our homes," resident Thu Ya Zaw told Reuters news agency in the central town of Myingyan.

Violent crackdowns using live ammunition were reported in more than 40 locations across the country.

Local news site Myanmar Now put the death toll at 114, while the United Nations said it was receiving reports of "scores...