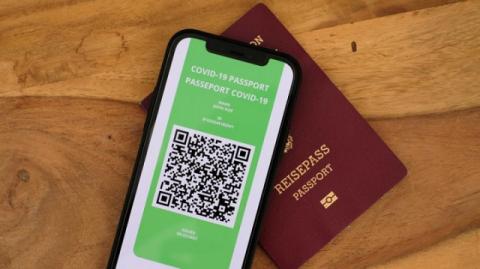 European Internal Market Commissioner and head of the EC's vaccines task force, Thierry Breton, unveiled the first European "health passport" on Sunday, claiming he hopes Europe will have a summer season "comparable to last year". The new health certificate should be available "within two to three months" in both digital and paper formats, Breton told RTL radio and TV channel LCI.

"For those who have had neither the vaccine nor the disease and for whom a PCR test will be requested, you can see the status of your PCR test," he added.

It was the first time, people got a glimpse of the health passport that will be made available throughout the EU, validated by the 27 Member States.

"From the moment we can be sure that every European who wants to be vaccinated will have fair access to the vaccine, as will be the case in the next two to three months - it will be good to have a health certificate that demonstrates your condition," said Breton.

Implementing the health travel document is planned for 15 June, which would allow travel to resume across Europe, he added. This is supported by an acceleration of Covid-19 vaccination rollouts, with the European Union expected to deliver 420 million doses by mid-July.

"We have to shift to the next gear. This will be the price for having a tourist season that I hope will be comparable to last year's, which in the end wasn't so bad in...