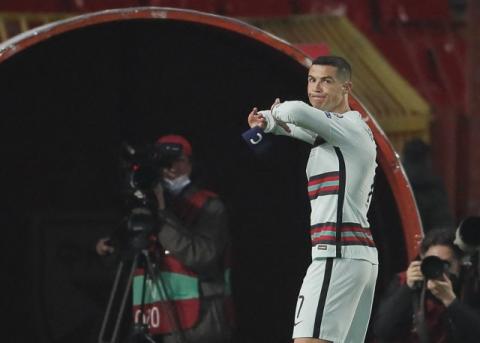 The captain of the Portuguese squad, in added time, angry that the referee did not award a winning goal to Portugal, angrily threw the captain's armband and left the pitch, then returned briefly, allowing the referee to end the match.
It is an understatement to say that Ronaldo was gone ballistic, claiming that Portugal was robbed by the referees, but now he could be in trouble due to unsportsmanlike behavior.
As "Corriere dello Sport" writes, his action could be characterized as "an insult or a violent act".
Article 11 of the FIFA Disciplinary Code states that this is an "offensive or violent act of violating the rules of fair play".
"Associations and clubs, as well as their players, officials and members or persons acting on their behalf, must act in accordance with the Code, FIFA Statute and Regulations, FIFA Directives, Instructions, and Decisions, which means that they must act in accordance with the principles of fair play, loyalty, and integrity of the game", as stated in the Code.
As Ronaldo directly violated this article by throwing the armband and leaving the pitch, it is clear that this could be seen in Zurich as a punishable violation.
Still, a confirmation from FIFA whether Ronaldo violated Article 11 has not been made.
In the event that he is charged and found guilty, Article 12 below explains the possible punishment.
"A person violating the rules could be penalized with one match or an appropriate period of time off the field for unsportsmanlike conduct towards an opponent or anyone other than the referee of the match."

EU Tourism Summit to Decide on Sector’s Transformation and Sustainability
SMEs should also receive grants through PNRR, not only financial instruments

NATO Will Hold Military Drills on Alliances’ Southern Wing, Troops and Vehicles Will Pass through Bulgaria
PCR tests from Serbia, Turkey recognised as of Wednesday