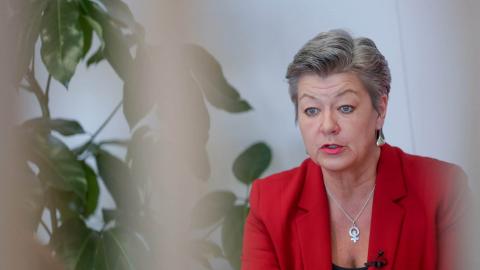 The European Commissioner for Home Affairs, Ylva Johansson, is on a two-day visit to the Greek islands of Samos and Lesvos, marking the allocation of over a quarter-billion euros of EU funds to the Greek state towards construction of new migrant reception facilities on the Aegean islands.

The Commissioner explained the timing of her visit, stating that, "spring is the best time to prepare for winter", and adding that while the winter hardship experienced by asylum seekers on the Aegean islands in 2020-2021 was "unfortunate", similar hardship this year "must be avoided".

During her visit, the Commissioner is expected to visit the temporary camps on Lesvos and Samos, assess the progress of the creation of the new facilities, and meet local officials, including Greece's Minister of Migration and Asylum, Notis Mitarachi.

On Tuesday, Johansson is due to meet the Prime Minister, Kiriakos Mitsotakis, and other ministers, in Athens.

Mitarachi called Johansson's visit "a great chance for her to see the progress that we have made in the immigration issue, but mainly to discuss with the [island] residents the consequences of the crisis and their concerns".

Progress made in constructing new reception centres by the centre-right government was questioned by international media just before Johansson's visit on Sunday.

Germany's Der Spiegel revealed that the new camp on Lesvos will not be ready by September, as had been planned, with asylum...