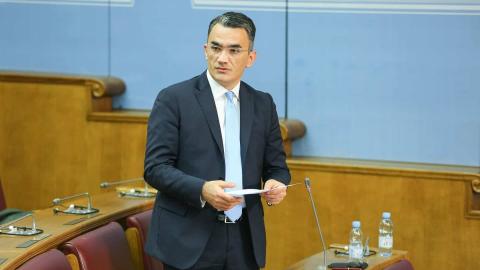 "The embassy is concerned with comments casting doubt about what occurred in Srebrenica in 1995. We look for clarity and hope the government will unequivocally condemn the massacre and call it what it was - genocide," the US embassy said in a post on Twitter.

Leposavic, a pro-Serbian politician, argued that the UN war crimes tribunal in The Hague, which classified the massacres of Bosniaks from Srebrenica as genocide, had no legitimacy because he claimed it had destroyed evidence about the trafficking of the organs of Serb civilians in Kosovo.

"I am ready to admit that the crime of genocide was committed in Srebrenica when it is unequivocally established," Leposavic said in parliament on Friday.

Political leaders of pro-Serbian parties in Montenegro have consistently refused to accept the Hague Tribunal's definition, saying that Srebrenica killings were a war crime but not genocide.

"The UK remains clear in its longstanding position, that what happened in Srebrenica was genocide. These are facts, established before two international courts, on the basis of overwhelming evidence," the embassy said on Twitter on Sunday.

Opposition parties and civic activists have called for Leposavic's resignation, and urged Prime Minister Zdravko Krivokapic to criticise his comments.

But Slaven Radunovic, an MP from the pro-Serbian Democratic Front, accused the US and British embassies of putting political pressure on the government.

"The attitude of many people in Montenegro is not against the victims in Srebrenica, but only against the...