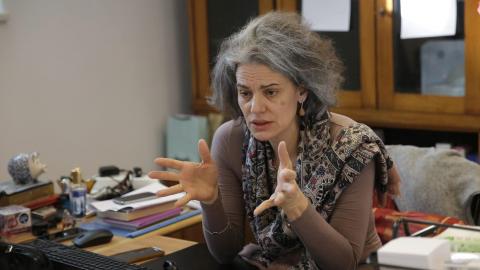 Romanian prosecutors on Monday said police had arrested a man suspected of sending anti-Semitic death threats by email to the well-known Romanian Jewish actress and director of the Bucharest State Theatre, Maia Morgenstern.

"On 27 March, the suspect sent from an email address a message with threats of an anti-Semitic character which included deaths threats and threats to harm the targeted person and the employees of the Jewish Theatre," Bucharest's Sector 1 prosecution office said in a statement.

Morgenstern revealed the contents of the email on Saturday, which coincided with the first day of the Jewish Passover.

The text referred to a recent incident in which Morgenstern - who won international acclaim in 2004 for her role in Mel Gibson's Passion of Christ - dencounced a Romanian official for using a derogatory term for Jews in a meeting.

In the email, sent to several addresses of the State Jewish Theatre, a man named Andrei Ilarie wrote that "this Yid has her days numbered" and threatened to rape her daughter and burn down the Jewish Theatre. Mentioning the Holocaust, he added: "I intend to throw her into a gas chamber."

The hate message shocked Romanian civil society, and many public figures took to Facebook to show their support for Morgenstern.

Silviu Vexler, Jewish community president and MP for the Jewish minority in Romania, wrote on Facebook that the obscenely worded message reminded him of the anti-Semitic abuse Jews had to put up with in the 1930s.

Romania was an ally of Nazi Germany from 1940 to 1944, when 380,000 to 400,000 Jews were murdered there and in Romanian-occupied areas. Today only a few thousand Jews remain in a country that before 1939 was home to about three-quarters-of-a-million Jews.