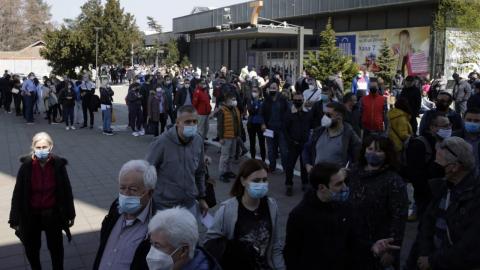 Some 8,500 business people from all over the Western Balkan region got their first vaccine jab against COVID-19 in Serbia over the weekend

The remarkable initiative was organised by the Chamber of Commerce of Serbia whose head, Marko Cadez, told national broadcaster Radio Television of Serbia RTS that the action will be repeated.

eGovernment Office did not answer questions from BIRN about exactly how many other people from the region got jabs in Serbia on Saturday and Sunday.

But long lines of people could be seen in front of main vaccination centres in Belgrade, the Belgrade Fair and Belexpo Centre, as well as on border crossings with Bosnia and Herzegovina, North Macedonia and Montenegro. Others came to Serbia from Montenegro and Albania.

Serbian Prime Minister Ana Brnabic told Happy Television on Monday that Serbia would have to destroy 20,000 to 25,000 AstraZeneca vaccines because they expire at the beginning of April, and that Serbia did not want to do that, but to instead help the region by inviting citizens of other countries to take them.

The head of the eGoverment Office told RTS on Sunday that 22,000 foreign citizens have been vaccinated in Serbia so far, and that all of them got the AstraZeneca vaccine.

But some people in Serbia have criticised the offer of free vaccines to foreign nationals.

A medical workers association, "United against Covid", said Serbia's priority should have been "to organise a campaign for vaccination of its own population … and systematic suppression of mindless anti-vaccination appearances in the government-controlled media".