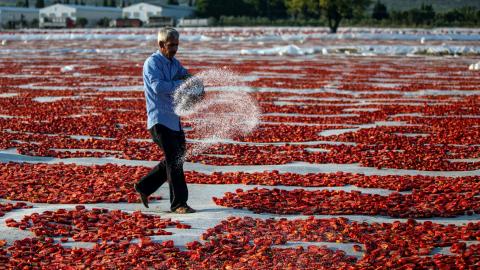 For five generations, Ahmet's family has farmed the rich agricultural land of Thrace in northwestern Turkey.

On 15 acres, the family for years grew sunflower, sugar beet and wheat.

But, said Ahmet [not his real name], "over the last 10 years we stopped producing sugar beet and wheat and now we only farm half our land because of the high costs and the lack of support from the government."

"Now, every day new farmers choose not to go on," he told BIRN. "You can see this in the production and the rising prices at the market."

Once one of the world's agricultural giants, Turkey is now struggling to feed its own people due to what experts and farmers say are the mistaken policies of the government under President Recep Tayyip Erdogan and the lack of state support.

Last year, according to official data, the country imported 9.75 million tonnes of wheat, more than any other country in the world.

Farmers, meanwhile, are laying down their tools.

According to the state statistics agency, TurkStat, over the last decade the number of farmers in Turkey has plummeted by almost a half, from 1.1 million in 2010 to 568,000 in 2020, while the country's agricultural land decreased by more than 18 per cent between 2002 and 2020.

Sedat Baskavak of the All-Producer Peasants' Union, TUMKOYSEN, cited falls in the production of a range of foodstuffs, at a time when skyrocketed from some 65 million in 2002 to roughly 83 million today.

"Production did not increase," he said. "On the contrary, it decreased or remained the same."

"When we consider the decreases in production and the increasing population the catastrophic results can be better understood," Baskavak told BIRN. "The UN, experts and opposition were warning the...