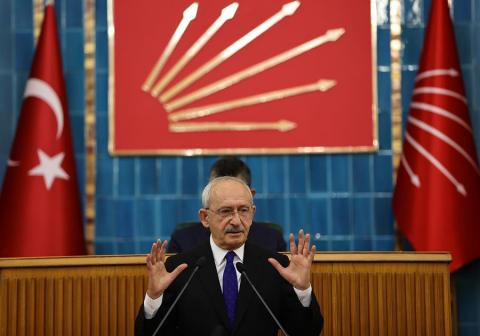 Main opposition Republican People's Party (CHP) leader Kemal Kılıçdaroğlu has urged the government to create employment for nearly 10 million unemployed people in Turkey, warning that this population could be a source of social problems over time.

"Those who run the state must know that unemployment is a disaster. Unemployment is the mother of all evil. When one does not do this, social problems arise," he said while addressing CHP lawmakers at the parliament on March 30.

He criticized that the minimum wage in Turkey was 2,825 Turkish Liras, with 3,577 lira as gross amount out of which 752 lira was for income tax.

He recalled that the CHP made calls to the government to raise this amount.

Kılıçdaroğlu noted that the CHP municipalities pay 3,100 lira minimum wage to their staff, but the ruling Justice and Development Party's (AKP) municipalities cannot make it.

The CHP leader also criticized AKP for holding a crowded party congress amid a rise in COVID-19 infections while tightening the restrictions in the country.

"Now the lockdown has started again. Who pays the price? They are shopkeepers," he stated.

The Borsa İstanbul board of directors have raised their salaries by 33 percent because the inflation rate is 33 percent, Kılıçdaroğlu said.

Turkish firm on track to be first B2B unicorn