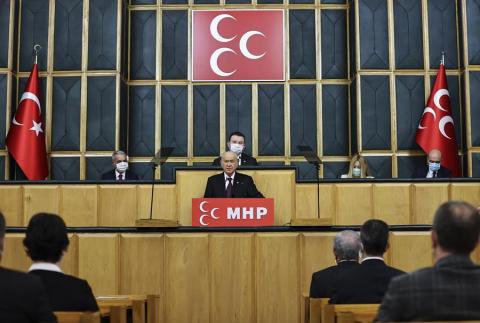 'The Istanbul Convention failed to meet expectations. Like signing the contract and becoming a party, withdrawal is also a right on behalf of a signatory country, a legal act. Withdrawal from the convention is correct and appropriate practice," Bahçeli said on March 30 while addressing his party members at the parliament.

The MHP does not accept violence against women, he said, condemning the news, programs and television series that encourage violence.

He also refuted the argument of the Republican People's Party (CHP) leader Kemal Kılıçdaroğlu for a possibility of a snap election in the fall.

"Do not get enthusiastic in vain and have hope in vain; the election will be held on time," he stated.

On March 20, a presidential decree was issued to end Turkey's participation in the Council of Europe's Istanbul Convention, a comprehensive treaty that introduces strict obligations to the party states to take all the measures to end violence against women and any sort of discrimination against women.

According to the convention, any party state can demand its withdrawal from the treaty through a formal notification to the Strasbourg-based organization. The Council of Europe has three months to process the withdrawal appeal. In Turkey's case, it will be formally withdrawn from the convention three months after it submits its notification to the organization.