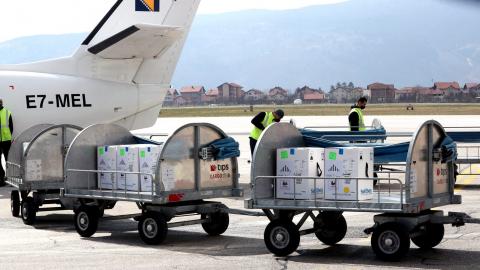 Political leaders have come under fire for botched vaccine procurement as Bosnia and Herzegovina is hit hard by the latest wave of the pandemic, with another 2,000 infections registered on Wednesday.

But in a country of some 3.5 million people, only 130,000 vaccines have been procured so far, most of which came as donations.

Minister of Civil Affairs Ankica Gudeljevic promised on Wednesday that the situation will soon improve.

"According to promises of vaccine arrivals, the second quarter of this year should look much better," Gudeljevic told a press conference on Wednesday, after meeting the chairman of the state-level Council of Ministers, Zoran Tegeltija, and the prime ministers and health ministers of Bosnia's two political entities.

But critics condemned the country's political leaders for incompetence.

"In any normal country, someone would have resigned a long time ago if the state had been in the situation in which Bosnia is. However, this rule does not apply to us," Banja Luka-based political analyst Tanja Topic told BIRN.

When the Bosnian authorities realised that vaccines ordered through the global procurement program, Covax, would be delayed, they decided to enter into direct negotiations with manufacturers.

Adil Osmanovic, head of the Party of Democratic Action, SDA's club of...