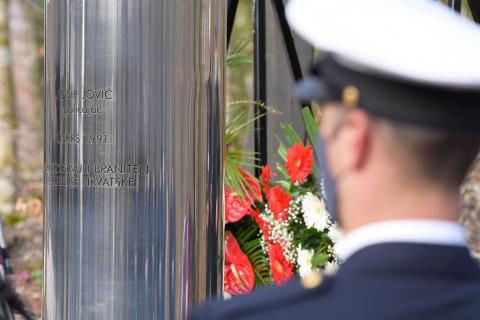 Croatian political leaders gathered on Wednesday in the Plitvice Lakes national park to commemorate the 30th anniversary of Operation Plitvice and the death of Josip Jovic, the first Croatian police officer killed in 1991-95 war for independence.

President Zoran Milanovic, Prime Minister Andrej Plenkovic and other ministers laid wreaths in front of a memorial installed in honour of Jovic.

"Eternal glory and thanks to Josip Jovic, who was killed, and who did not have the opportunity to welcome Croatia's freedom, which they fought for here," Milanovic said.

Plenkovic said that Croatia was marking the 30th anniversary of the police operation, but also the death of "one of the many police officers and war veterans who gave everything they had for freedom in the Homeland War".

Zoran Milanovic at the commemoration. Photo: Office of the President of the Republic of Croatia/Marko Beljan.

Serb paramilitaries ambushed a convoy of Croatian police vehicles on the road, sparking an armed confrontation between the two sides. Jovic was hit by gunfire and died before arriving at hospital.

Although Croatian police regained control of the local police station, they had to withdraw later and the area remained under Serb rebel control until August 1995 when Croatian forces regained the territory during the army's Operation Storm.

Various events are being held to mark the 30th anniversary. An exhibition entitled 'Memories of Bloody Easter'...