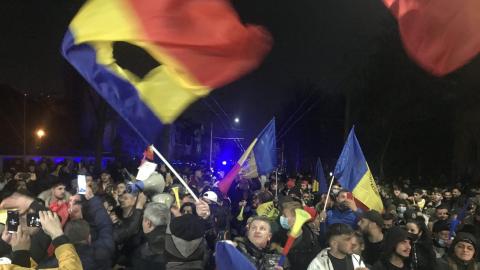 Several thousand Romanians took to the streets of Bucharest and other cities for the third night in a row to protest against government COVID-19-related restrictions they consider abusive, arbitrary and harmful for the economy and freedom.

The latest protest was called, as in the previous days, by nationalist, conservative and religious groups on Facebook. In Bucharest, it started at dusk in the capital's University Square, from where several hundred demonstrators marched to the government's headquarters in the northern part of the city.

A protester waves a huge Romanian flag before the start of the march. Photo: Marcel Gascon Barbera/BIRN

Protesters, some of whom waved Romanian flags and brandished Orthodox Church symbols, shouted slogans about "freedom" and demanded the resignation of the centre-right government.

One of the targets of their anger was Romania's COVID-19 czar, Raed Arafat, who is of ethnic Arabic origin. Some of the chants or messages against him were xenophobic in tone, as it is habitual in these marches, which President Klaus Iohannis has condemned.

A leader of the anti-restrictions movement, Pompiliu Diplan, speaks to protesters at University Square in Bucharest. Photo: Marcel Gascon Barbera/BIRN

Those taking part in the march, many of whom did not wear masks or maintain a social distance from each other, also demanded the immediate reopening of the schools and protested against what they call "forced vaccination".

Unlike the previous protest, on Monday night, when 12 police where injured in Bucharest after some demonstrators attacked them with fireworks, rocks and other objects, no incidents were reported on Tuesday.

Protesters marching through Victory Square towards the...