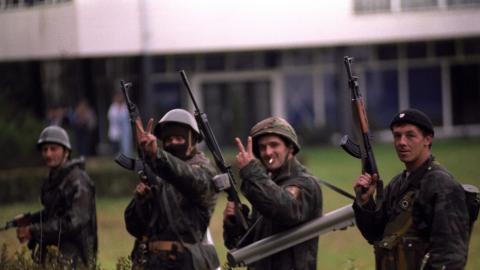 Croatia is now the youngest member of the European Union and has established itself as one of the most popular tourist destinations in Europe. Its cultural specificities, sports icons and young people who constantly push the boundaries of innovation in business and technology represent its most recognisable signs of progress.

Yet many of those who were born just before and during the war have since left the country. While Croatia has established itself as a tourist paradise and attracts visitors and investors with its abundance of natural resources, it has nevertheless lost a large amount of young and capable members of this war generation, people who are crucial to its demographic vitality.

Research conducted in 2018 showed that the loss of faith in democratic processes and the rule of law and a climate that tolerates corruption, nationalist exclusivism and religious intolerance are among the top reasons for leaving the country.

These reasons point to greater deficiencies in governing the country and shaping its social, economic and political landscape. Many of these are inextricably related to the ways in which the state leadership treats the legacy of what in Croatia is called the Homeland War; a defining moment in its history.

In 2000, the Croatian National Assembly issued a 'Declaration on the Homeland War', which states that its legacy is unequivocally accepted by all citizens of the country, leaving no room for questioning the victor's perspective - a rather surprising move in a democratic country.

Croatian officials including then President Kolinda Grabar Kitarovic attend a commemoration in March 2018 of the fighting at Plitvice Lakes in 1991. Photo:...